The garden on my nature strip is now a couple of years old. It has gone through the seasons twice. The street tree and Westringia are well established. The Austromyrtus tenuifolia (midgen berry) are growing slowly. Several of the Dianella clumps, the Kangaroo Paws, and the Dwarf Banksia are doing ok despite a harsh summer.

The responses from neighbours and other pedestrians has been almost invariably positive, although it hasn’t yet inspired any to follow suit. One neighbour got a street tree from the council but it is surrounded by grass.

Some say it’s a good idea but too much work or too much commitment, yet when I compare my neighbours’ mowing and edging in the heat to my wandering out for the odd bit of hand weeding, I think I’m the one doing the least work. The big hurdle is the outsourcing – if you pay someone to come and mow, that appears to be what you’re stuck with.

I’ve overheard conversations of people telling young children what the flowers are, seen an elderly lady reaching out to touch the pink cosmos, and I never know whether the missing flowers are the work of the possums or people. Either way, it’s good.

The most treasured response is a hand-made, unsigned card found in the letterbox one day. I still don’t know who it is from. 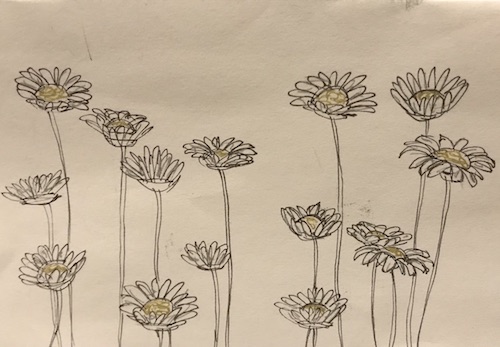 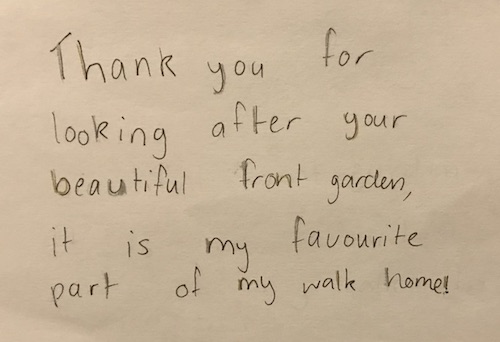 And just this last week, I was talking to another passerby about how I’d like the whole street to be one long nature strip. He look up and down the street and smiled.

“Yes, but then you’d have people driving around like they do for the Christmas lights.”

Imagine that – instead of expensive and wasteful plastic Christmas lights and decorations, you’d have trees, shrubs, gardens, flowers…  Sounds like a change in the right direction to me. Could this Christmas be the first of many?