The Most Important Equipment for Walking in the Suburbs

I had to get from North West Hospital on Flockton Street to the Everton Park shops in Brisbane today. It was a hot sunny day, 30+ degrees. I'd not planned on walking so had no hat, but I did have the most important equipment of all for walking - my phone.

I checked the map for the most direct route to walk. By car, you would go out to the main roads shown at the side of the map below but I felt sure that there was a shorter way through. There was. 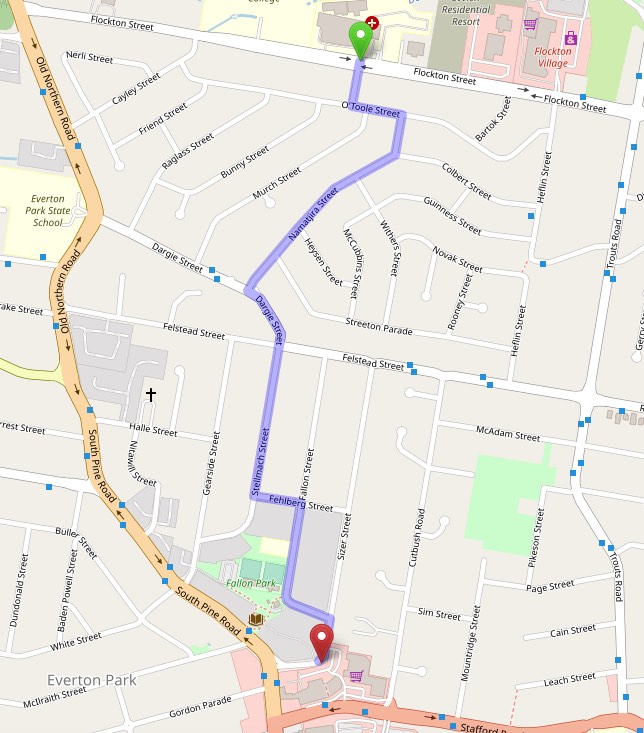 North West Hospital to the shops at Everton Park

That is where the phone is invaluable when walking. Like many Brisbane suburbs, Everton Park is not built on a grid system. No problem in your car with a GPS - so what if you lose a minute or two taking a wrong turn.

But take a wrong turn while walking, especially in that maze of streets at the top of the map, and you lose many more than a few minutes.

My phone doesn't show shade, although satelite view can give you some clues. Someone is developing an app for that - see www.shadeways.net

The next journey was getting home, and that would be by bus, which runs every 30 minutes on weekdays, less often on evenings and weekends.

On my phone I have the bus timetables of all the routes I use regularly on my home screen. But I also have a new app that uses real-time data to tell you where the buses actually are and when they will arrive, similar to the screens at the major stops.  (see more on Brisbane City Life here)

While this technology makes it much easier for me to practice active transport, it relies on individuals having the equipment, internet access, and skill to use them. These options shouldn't be used to excuse the lack of adequate signage for pedestrians, more pathways between houses to combat the street mazes, and better "smart" bus stops with information and shelters.  (This is an example of a really dumb bus stop.)

What did I see on my walk? Check it out on Brisbane City Life here.