Can Councils and Residents Collaborate to Create Green Streets?

A few years ago some residents at Buderim on the Sunshine Coast transformed their streets into food gardens. It was featured on Gardening Australia and no doubt the participants and supporters saw this publicity as a major boost to their urban food growing movement.

Then the Council received a complaint and ordered the gardeners to comply with the existing laws for verge gardens - or apply for permits and get public liability insurance for anything beyond that.

Some residents held out and negotiations failed, culminating in a showdown and dramatic photos of Council workers removing established fruit trees from the footpaths. In the end, everybody lost. The movement is gone and the Sunshine Coast Council is still being portrayed on social media as being the hostile council that ripped out the fruit trees even though they have a quite reasonable verge gardening policy similar to many other councils.

In November, there was a story on Gardening Australia about nature strip gardens in Melbourne. These are gardens for bees. Again there is a lot of enthusiasm and talks of a movement. And again this enthusiasm triggered a complaint against non-compliant gardens and the City of Port Phillip Council is obliged to act.

The Council has produced draft Nature Strip Guidelines and are requesting public feedback by midnight Sunday 13 February 2022. Many of the current gardens would not be compliant and would need significant changes or removal.

This gardening movement also has a website and public facebook group to promote their cause and argue their case. Again supporters are passionate about the benefits of the gardens for their community and the planet and just want the Council to let them get on with it.

Can We do it Better?

I am a long-time advocate for verge or nature-strip gardens and I watch these dramas with dismay as they career towards another showdown and a situation where everybody loses.

The Council seems to be trying its hardest to find a positive solution. Residents are willing to put time and money into improving their neighbourhood. If good intentions were all that mattered, this would be an opportunity to improve their streets instead of a battle over who can plant what where.

Transforming every bit of neglected and barren urban ground to biodiverse planting is a worthy goal with many environmental and social benefits. The nature strips in a city make up a significant amount of land to foster biodiversity. The right planting supports the health of street trees. Cooling from street trees and exposure to nature has positive mental and physical health effects for people.

But this is a complex and highly contested space with many current and future stakeholders to be considered and we need to find ways to address that complexity better than “plant anything everywhere” or “plant hardly anything anywhere”.

If you wanted to find an example of the Garrett Hardin’s Tragedy of the Commons, it’s there in most urban streets and roads. One thing dominates - and that is cars. Vast areas are hard surfaces for driving and parking. Councils are trying to increase tree canopy and new street trees struggle in hostile environments.

The old “plant grass and nothing else” rules are the classic bureaucratic method of maintaining order. If we allow verge gardens, they cannot interfere with sightlines and must leave room for passengers to alight from parked vehicles. Pedestrians are squeezed into narrow bands at the edges with the occasional street trees, gardens, and other services.

But as others like Elinor Ostrom have shown since, it doesn’t have to be that way. Positive and localised solutions for stewardship of the commons are more complex - collective action, cooperation between many stakeholders, developing and enforcing rules to ensure that the commons is nurtured rather than depleted by selfishness or lack of care.

The growing number of verge gardening policies from Councils around Australia  suggests that some Councils (or some people within some councils) are trying to work with residents to increase planting. On the other side many residents are planting out their verges - albeit in a haphazard and uncoordinated way with a variety of motives and attitudes - check the reverge facebook group with more than 4000 members.

Those of us who see verge gardening as part of the solution to address the looming issues of urban heat, biodiversity loss, and climate change are finding progress frustratingly slow. There is slow take-up by residents, resistance from sectors within councils, and the occasional eruption into public disputes as described above.

It turns out that what seems to be a simple idea - replace grass with better plants so residents tend a low-maintenance garden instead of mowing the nature strip - is extremely complex.

I have found there are three key issues

1. Native strips or verges are inherently contested and political places with many stakeholders to consider. Ignore this and you end up with disputes like those described above. (read more here) 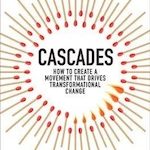 2. Changing everyday practices of many autonomous and independent people requires more than being right or having a good idea.
Greg Sattel’s “Cascades: How to Create a Movement that Drives Transformational Change”, offers a good analysis of why most movements fade away and insights into how to create sustainable change.

3. Collaborations are the key - and collaborations are much more than people operating in the same space.  The image I have for the Shady Lanes Project is based on the loose collaborative networks that I found in earlier days of online publishing and performance marketing where disparate autonomous businesses came together to create something that none could have done on their own. Collaborations were messy and ever-evolving but when it works it creates something that no individual players could have done on their own.

When I read “Strategic Doing: Ten Keys for Agile Leadership” by Ed Morrison, I found many of the practices and sometimes painful lessons learned from those days reflected in well-researched work. This book isn’t yet another business theory book - it’s firmly based in practice - with an emphasis on conversations and communication to build open, loosely connected networks of many autonomous participants with a common goal.

The understanding and trust built through those conversations while establishing common goals is how we might find ways to build collaborations where resident-planted and maintained verge gardens complement and contribute to increases in tree canopy that Councils must achieve to address climate change and other environmental challenges.

Which brings us back to the question - how can councils (workers and politicians) and residents collaborate, or learn to collaborate, on planting the streets at the scale needed to make a difference. This is especially important in established suburbs where there is little funding for retrofits.

There are many variations of the relationships between residents and councils - residents are clients to be served or people to be managed by Council, some residents think councils should maintain all public space while others think Councils should not interfere with so many regulations. Add to that the silos within councils and the various departments that have interest in this space. Politicians add yet another dimension.

Each person comes with a different viewpoint, different goals, and different expectations.

To address this, we often group individuals into sets of stakeholders but that framework places us into roles that encourage people to fall into conversations that are adversarial, competitive or transactional.

As stakeholders, we talk at each other usually with the aim of domination or compromise to ensure that as many of our goals are met as possible. We have checklists of stakeholders and often say we are considering the needs of stakeholders without their involvement. Council want residents to comply; residents want Council to let them keep their gardens; gardeners say their gardens are safe for pedestrians.

As collaborators, we talk with each other with the aim of coming up with something bigger and better than our individual and immediate goals. Collaborators can only speak on behalf of themselves and they seek out and listen to the views and ideas of other collaborators. Collaborators bring diverse knowledge, ideas, experience, and other assets to the table.

Could we design collaborations and conversations so that those who want a say in the policies also share the experience of planting out their nature strip and having to fall within the restrictions of the rules, and that enthusiastic gardeners also share the load of coming up with guidelines that are general enough to fit many different streets and gardeners with very different levels of knowledge?

Could more open conversations mean solutions emerge that address conflicting goals like the arborists' concern for the health of their existing street trees with gardeners' desire to plant around their street tree?

So here’s the question

How can we create ongoing and adaptable collaborations to increase the planting on our streets for shade, biodiversity, and habitat in a way that accommodates the multiple uses and diverse current and future users of that space in a way that’s doable right now?

If we can do this, not only do we avoid the conflicts above but we create something that will be done no other way.

My single verge garden has created 58 square meters of biodiverse habitat with more than 20 species of native plants - within the existing council policy.

If just half the residents in my council ward planted out 40 sq metres it would create 30 hectares of biodiverse habitat supporting street trees and creating pollinator corridors.

If half the residents in the Brisbane council region planted it would create about 600 hectares of biodiverse habitat - without the need to purchase any land.

All it needs is that simple idea - for citizens to replace grass with suitable plants so they tend a low-maintenance garden instead of mowing the nature strip.